Attention: The detailed description texts of the winning games have been automatically translated. There is a high probability of errors. 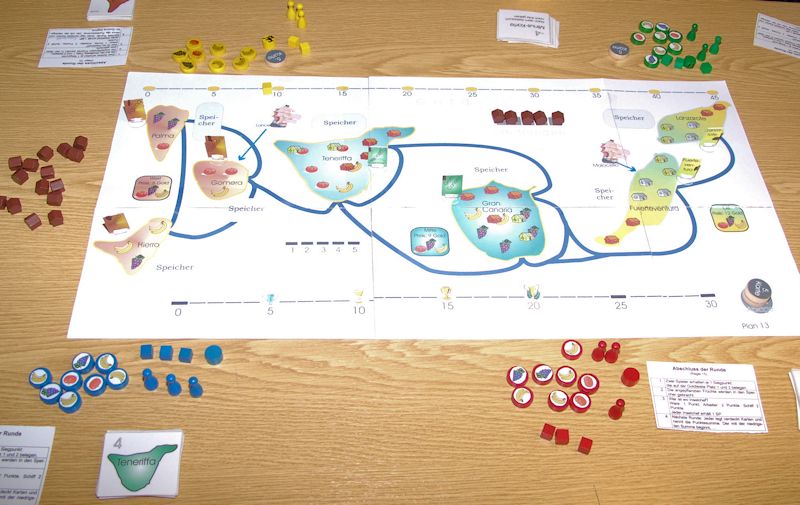 In Lancelotto Malocello, players populate the Canary Islands, planting various fruits to sell them profitably. The islands are assigned to three different regions, where either the conditions for cultivation are good or the prices for the sale of goods are high and more possibilities for the construction of houses are available. The possible actions are: growing goods, selling goods, founding a settlement, moving workers, transporting goods and pulling a ship. In order to perform these actions, they must be combined with corresponding island maps to indicate where each action is performed. At the beginning of a round, all players place face down 1-4 Action and / or Island cards. Then all players count the dots printed on them and name the sum. The player with the smallest amount starts, the others follow in ascending order. You can play a fifth card once in the game and / or reduce the score of the played cards with Minus cards. However, these minus cards move to the opponent after use. Gold can be earned by growing goods, harvesting and selling. Workers reduce the cost of cultivation, ships speed up the transport of goods. By majorities of ships, workers and goods you become island chief, which in turn leads to privileges and victory points.

At the end of each round, one victory point is awarded to each of the top two players on the gold bar and for each island boss. The island chiefs are possibly evtl. newly determined and apply until the end of the next round. The planted fruits are harvested and can be sold in the next round. It may make sense to bring this to an island that has no attachment options, since there higher prices are paid.

The game ends as soon as a player has gained 20 victory points or when all 20 houses on the islands are installed. For every 10 gold, there will be 1 victory point each. The player with the most victory points wins. 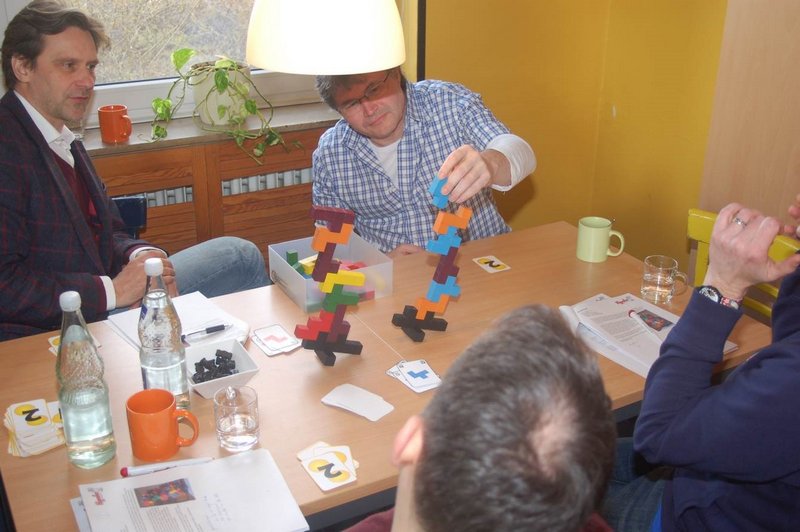 Players will be able to build two towers together and get points for the increase in height as well as a premium for being placed on the highest tower. What sounds like a cooperative game turns out to be a contest between the players, who in turn try to make it difficult for their opponents to continue their game by cleverly placing their pieces.

According to an assignment card, the active player must integrate a specific component into one of the two towers without collapsing. In this case, the player must estimate before inserting the stone, which tower acts more resilient; because he changes the tower, he loses points. For the successful insertion of a component the player receives points. The courage to risk is additionally rewarded. If the player overestimates his skill and the tower falls, this will be penalized.

As soon as the deck of cards has been played through and one of the towers collapses, the game ends and the player who could collect the most points wins.
The game offers several variants in different difficulty levels. 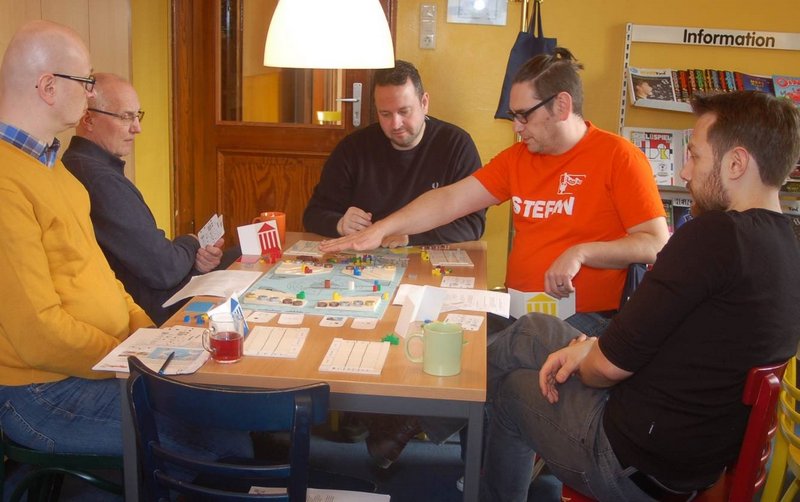 In Kallipolis, every player steers the fortunes of a city-state in ancient Greece and tries to gain the most fame in four rounds. For this one fulfills the wishes of the gods, founds or extends settlements, builds ships and recruits heroes. In the middle of the board is a circle showing the current round (inner circle) and the current action (outer circle). In each round there are up to 4 human actions, 2 actions of the heroes and 6 actions of the gods. During the first 6 actions the players are active and during the second 6 actions they react to the wishes of the gods.

An important gameplay at Kallipolis is that all players always plan their action simultaneously and secretly. An action consists of two parts. There are four different locations and three different options. An action thus arises from the combination of place and action. Resources are limited. If several players want to act in the same place, the one who has the privilege of this place may act first.

Some actions require the support of residents who, due to their social status, bring different bonuses. Heroes also bring lasting or unique benefits to players. With the help of a sliding panel, the social status and the aging process of the inhabitants and heroes is documented.

After the fourth round, there is a final score, counting the majorities. The winner of the game will be whoever achieves the most fame (victory points).