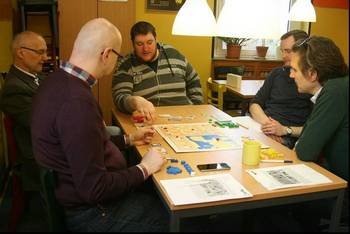 The woolen cloth trade was the engine of Florence’s economy in the late Middle Ages. As members of the “Arte di Calimala” guild, players are working as clothiers and trying to increase their prestige by building up production facilities, expanding into major European cities, as well as donating monuments and artworks to the city.
Depending on the number of participants, each player receives a certain number of action discs. Beginning with the starting player, each player places one of his discs on an action space with two corresponding actions. If there are slices there, the underlying slices are activated. Used early enough in the game, a disc can generate up to six actions. But more than three targets must not be on an action space. If a fourth is placed there, the bottom pane moves to the city council and triggers a rating there. The game ends when all players have used their action discs or all scoring fields in the city council were triggered and each player had the same number of turns.
The structure of the action and rating fields is variable; Action and secret destination cards make for surprises. 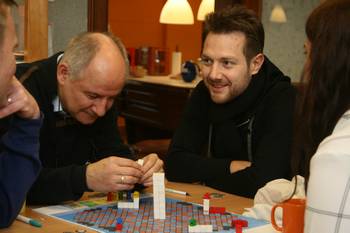 A large temple is in the middle of the game plan. The stairs that led to its top are dilapidated. The last ruler of the Incas, who was enthroned there, left the earth without heirs. Now the race for the throne has begun.
The goal is a uniform path from the edge of the board to the top, the 8th. Level of the temple, build. The track will be gradually built so that the candidate can climb up. The blocks have different shapes similar to the computer game “Tetris”. The playing field consists of land and water fields. The structure can not be built on water, but must bridge it. Each round, players offer coins for the blocks to expand their structure. The higher you stand, the higher the income. Sometimes it can be tactically sensible not to climb to the highest level of your structure.
Creativity, imagination and a little skill are helpful because you will not always get the right building block. 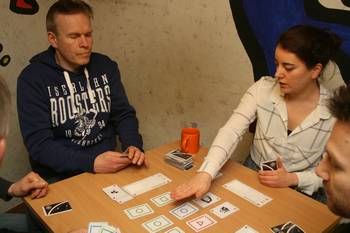 From a “dark void” try to escape demons. The players work together to form a team of unique guardians with special abilities. Your task is the completion of a ritual.
Players collect cards from the central display, the “Dark Void”. You do not want to take demons, but you have to be careful to keep your teammates in the game by not leaving them chaotic. Certain card combinations allow actions such as attack, healing, or summoning. The effects, however, depend on the different abilities of the characters.
When ten cards are played for the ritual, players have closed and won the Gate of Dark Void. If all players are exhausted or the ritual is not completed by the end of the third round, the game ends with a defeat.